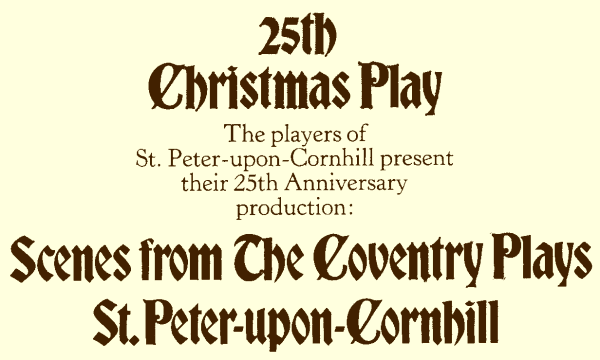 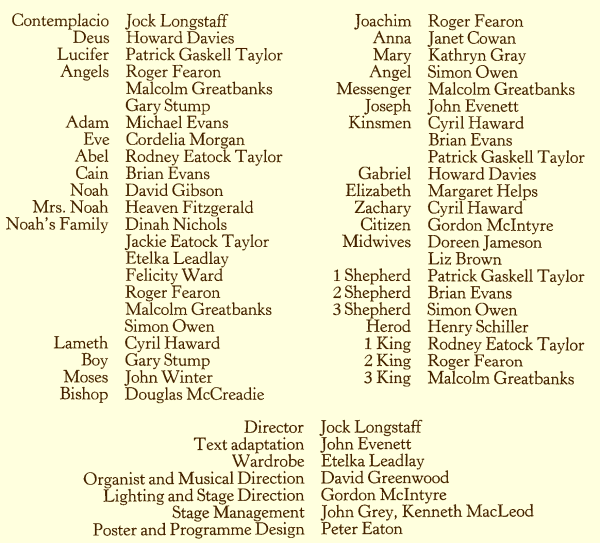 It was in 1947 that Prebendary Douglas Owen, then Rector of St. Peter-upon-Cornhill, decided to put on a Christmas Play in this magnificent Wren church. Written and directed by the late Geoffrey Edwardes, the cast of professional and non-professional actors included Heaven Fitzgerald and Jock Longstaff, both happily appearing in this year's 25th anniversary production.
Jock Longstaff took over the direction in 1952, and at the same time had the inspiration to revive scenes from the great cycles of medieval mystery plays which for centuries had been so lively a feature of the Church in England. This was so successful that the idea was continued year after year until now it has become a tradition that the Players of St. Peter-upon-Cornhill present scenes from the plays of York, Wakefield, Chester and Coventry in four-yearly rotation.
Under the spirited chairmanship of the present Rector, the Revd. Alan Cook, the plays have become even more popular and important a part of Christmas in the City; and in summer 1970 the Players also staged a highly successful Passion Play as part of the City of London Festival. It is hoped that this too will become a regular (bi-annual) event.
For the 25th Christmas Presentation, which is the 20th under Mr. Longstaff's direction, the Players will present Old Testament and Nativity scenes from the Coventry Plays: The Creation, The Fall of Lucifer, The Fall of Adam and Eve, Cain and Abel, Noah's Ark, Moses and the Ten Commandments, The Marriage of Mary and Joseph, The Annunciation, The Visit to Elizabeth, The Story of the Cherry Tree, The Doubting Midwives, and The Adoration of Kings and Shepherds. (New Testament scenes leading on to the Crucifixion will be presented in July 1972.)
Although written more than a century before Shakespeare, the language and the verse-form still come wonderfully alive to the modern ear, and the plays give us a bright, clear picture of life and faith in the mediaeval England of 500 years ago. In selecting and editing scenes for production, the adaptor has held as closely as possible to the original texts, only altering, for the sake of clarity, the surprisingly few words that have since dropped out of everyday language.
Menu | 1970 | Lists | July 1972 | December 1972